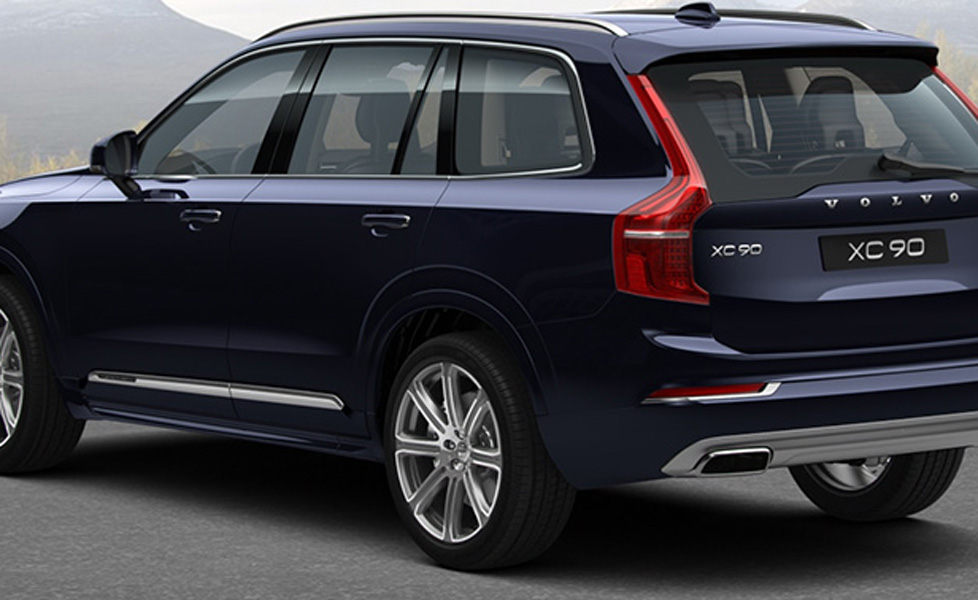 Volvo’s XC90 has been a popular choice among Indian buyers for years now, thanks to its raft of safety features, massive road presence and luxurious cabin. In 2015, Volvo launched the second-generation XC90 in India – an all-new model based on the brand’s new Scalable Platform Architecture. It is also the first model to have been introduced after Chinese owner, Geely, bought the Swedish brand. The new SPA platform consists of a high content of hot-formed Boron steel, which makes the overall structure lighter but stronger. It is also the lightest SUV among its rivals.

The Volvo XC90 cannot be mistaken for being anything other than a product by Volvo Cars. The lines are simple; there are no in-your-face details and there’s a certain elegance this SUV carries. The styling is far from plain, but we can barely imagine the front-end without those ‘Thor-Hammer’ LED DRLs incorporated in the headlights. Then you have the huge grille with the vertical slats that give it some aggression from the front. Also, the Iron Mark badge is bigger, and the 20-inch wheels on the sides give the SUV a tall stance. At the back, the Volvo XC90 gets the signature vertically stacked tail lights that have been re-designed for the new model of course. It really does play in part in giving the car the character it needs.

You’re greeted by a liberal use of unveneered wood and leather; the dashboard looks great. The design is a mix of waves and bits of chrome that give it a classy look. The SUV features a huge 9.0-inch touchscreen infotainment system, sporting clear fonts and excellent graphics, further making it wonderful to use – it even gets pinch-and-swipe functions, similar to all smartphones these days. What further ups the feel of luxury inside is the 19-speaker Bowers & Wilkins sound system – it sounds like nothing else in its segment; perhaps the best, even. However, certain portions could’ve gotten a better finish and the absence of paddle-shifters tends to draw a little bit of nitpicking. By and large though, the cabin is beautifully built. Visibility, from wherever you’re seated, is on-point and the panoramic sunroof and big windscreen give the cabin an airy feel.

The massive seats are nicely bolstered and have been designed bearing in mind the comfort of the occupant’s arms, limbs, back and muscles. So yes, there is great support provided. Even the middle-row seats are comfortable but we found the cushioning to be a bit on the firm side. The third row too is quite practical as it accommodates two adults decently well, and headroom is sufficient. Getting into the back, however, does come in the way. The Volvo XC90 is also one of the safest SUVs you can buy today, for it comes loaded with safety equipment like curtain airbags and the lot.

We got our hands on the D5 model, powered by a 2.0-litre, twin-turbo diesel engine, making 222bhp and 480Nm of torque. Diesel clatter is evident at idle, but it’s the responsiveness of the engine that surprises us. It surges ahead quickly and the clatter smoothens out once the revs begin to climb. Both the turbos work in sync to help put power down on the road in a seamless manner. Don’t mistake the small-capacity engine for being underpowered, because we can confirm that this is one among the best 4-cylinder diesel engines we’ve driven. Acceleration is linear and the transmission ensures smooth shifts, but if you floor it suddenly, the gearbox needs a moment to think and react accordingly. There are four driving modes on offer: Eco, Comfort, Off-Road and Dynamic. The first two modes are best suited for cruising on highways, while Off-Road mode ensures the SUV is raised by 40mm whilst engaging Hill Descent Control. Dab on Dynamic mode, and the SUV is lowered while the engine turns that bit more responsive. Thanks to the air suspension, the Volvo XC90 rides well; there is a certain softness to it that is bound to keep passengers happy. At low speeds though, the ride does get firm and you can feel the sharp ruts filter through. Thinking about it, the 20-inch wheels might be the cause. Handling, on the other hand, gives the driver confidence, while body control is managed well, particularly in Dynamic mode.  Also, grab the latest info on the new cars, only at autoX.